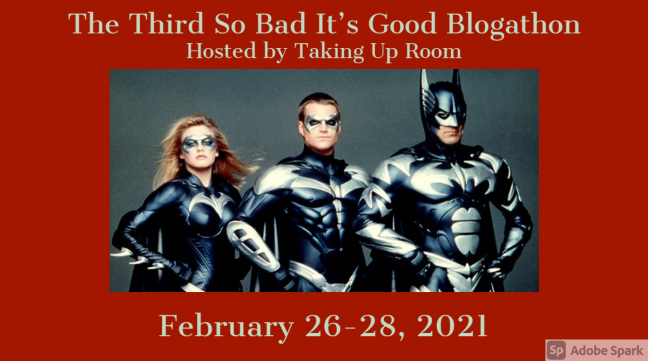 Image courtesy of Taking Up Room

Well, folks. I sat out the second round this year, but I’m beyond excited to report that I will be once again writing about craptastic movies for the third installment of the So Bad It’s Good Blogathon, taking place in 2021, and hosted by none other than Rebecca at Taking Up Room!

From February 26th through the 28th, my fellow film writers and bloggers and I will return to discuss some of the worst films Hollywood has to offer. Bad dialogue, horrific plots, groan-inducing acting, poor special effects-you name it, we’ll talk about it!

This blogathon was so much fun to write for last time, so you’re probably wondering  how will I ever be able to top my review of “Mommie Dearest” for the first installment back in 2019?  After careful consideration, I have selected yet another movie which pales in comparison to the book that it’s adapted from. Vivid descriptions of child abuse and imprisonment, greed, terror, murder and incest made 1979’s “Flowers in the Attic” not only one of the most controversial books ever written, but a runaway hit, and its author, V.C. Andrews, a household name. Inevitably, Tinseltown came calling, so, why would the 1987 film adaptation crash and burn?   I will answer all that and plenty more in the next few weeks!

Read the official announcement of the blogathon and learn about all of the entries right here!

View all posts by Katy